The Club has three ranges available at any one time:

25 yards for prone rifle and benchrest. This range has four firing points and the targets are changed electrically.

20 yards for sport rifle and air pistol. This range has four firing points, with target holders that can be fitted to a turning target mechanism. The length of time the target appears can be varied for rapid-fire events. We now have Newbold ricochet free knockdown targets for use in our in house competitions.

10 metres for air rifle and air pistol. This range has four firing points with electric target changers and each target is individually lit to provide the best possible shooting conditions for this very demanding Olympic sport.

The Club is fitted with many CCTV cameras for your safety and security.

The Club has two armouries for Club and members equipment. Lockers can be rented for a small annual fee.

The Club has now installed new ventilation systems on the ranges and in the Club room for improved air quality, and to minimise the risk of viral transference. 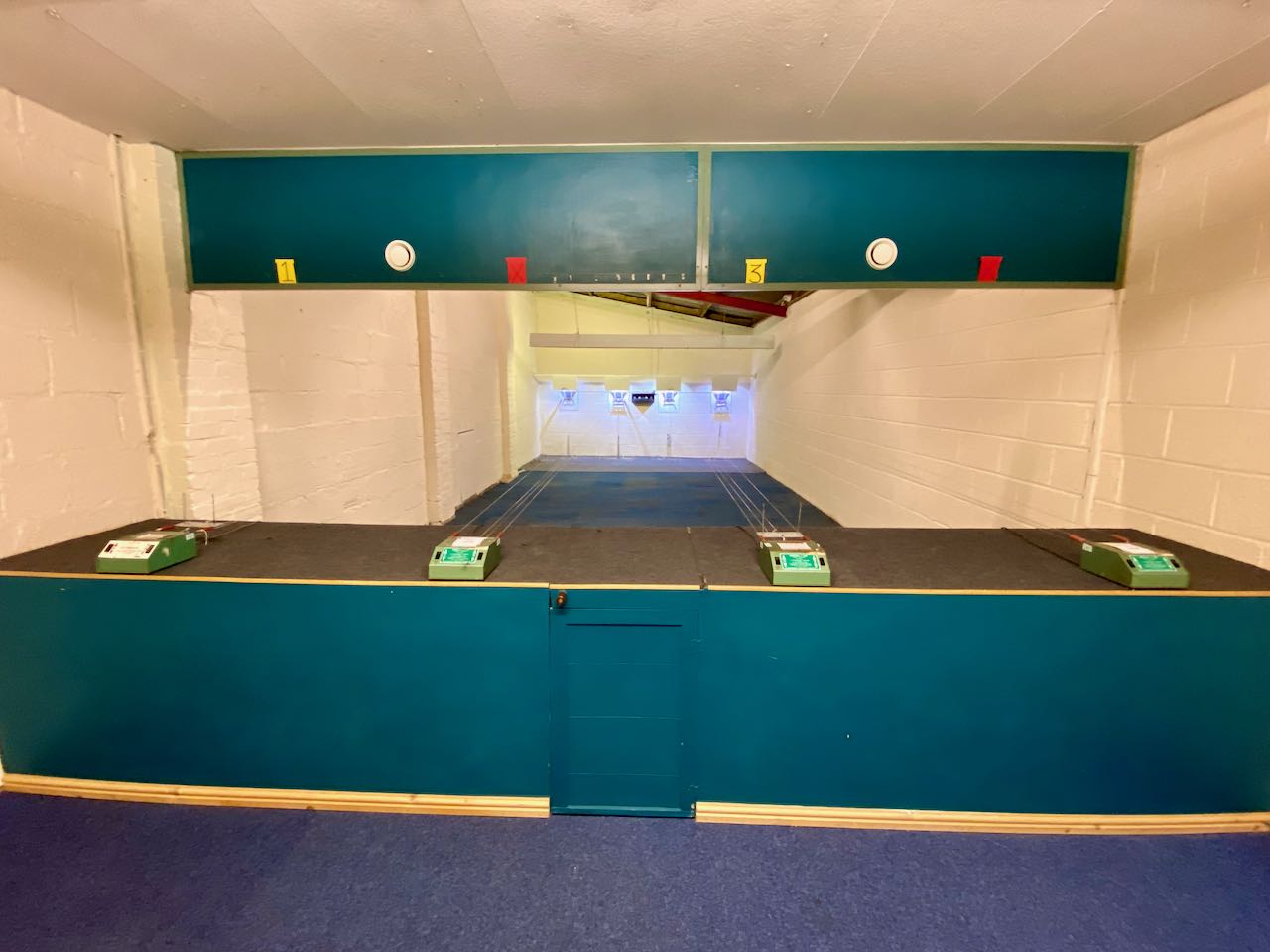 The Club has a range of single shot rifles for prone and benchrest shooting. A large selection of semi-automatic rifles are available for sporting rifle competitions. We also have a very large range of high quality air rifles and air pistols. All equipment is available for use by members at no extra cost.

A Brief History of the Club

On August 29th 1901 a match took place between the Paignton Volunteer Company 1st. Division Voluntary Artillery and a team formed by Mr. W M G Singer of Steartfield Rd. Paignton. The range was fitted out with targets at 200, 500 and 600 yards and was built on land provided by Mr.W. M. Singer.

As a result of the shoot, a decision was taken to form “The Paignton Rifle Club”. The Club continued to shoot on Mr. Singers’ land at Blagdon Barton, transport to and from the range being provided at reduced fare by the G W R Bus Co. The original competition was shot using large calibre military arms and similar weapons continued to be the mainstay until approximately 1909 when the .22 rimfire cartridge was introduced. The .22 rimfire cartridge is now the only calibre of live ammunition used in this Club.

A not so brief history of the Club!

During 1947 Paignton Home Guard Rifle Club amalgamated with Paignton Rifle Club. Following this, in 1948, a lease was obtained from the local Council for the land the Club stands on today and an application was made for permission to build a range and clubhouse.

Club members and local people were asked to donate towards the cost of building materials and to offer their services for the construction of the building.  Initial estimates were £350, this rose to £650 by the end of construction.  Tickets were sold for one shilling to donate a concrete block towards construction to assist in the funding with the promise that the ticket would be entered into a draw and the lucky winner would have the chance to purchase a Hoover vacuum cleaner valued at  £16  11s  3d. for the reduced price of one shilling!

In January 1949 permission was at last given by the Ministry of Works in Bristol and the War Office to construct the building, however, the members were instructed that only reclaimed timber could be used due to post-war restrictions relating to new homes needing the supply of new timber for rebuilding.

On 15th October 1949 at 3.30pm following construction by its members, the new range, having passed inspection, was officially opened on the current site.

72 years on and one of the oldest sporting clubs in Torbay, the Committee and membership enjoy and promote the sport of target shooting on the same site. The Club is affiliated to the NSRA, the NRA, the UKPSA and the DCSRA. Club members enter in-house, Devon County and national target shooting competitions.

Paignton Rifle & Pistol Club always feature very favourably in these competitions, keeping Torbay on the target-shooting map. With three ranges accommodating many disciplines in target shooting and personalised coaching whilst under the supervision of trained instructors and range officers, the Club continues to be popular with nearly a hundred junior and adult members from all walks of life with the sport of target shooting in common.

Those new to target shooting attend ‘Probationer night’ on a Monday evening and are taught the skill and discipline of obtaining the highest score they can using club firearms on the targets whilst ensuring that safety is at the forefront.  Full and advanced probationary members can attend on Tuesday, Thursday and Friday evenings between 7.30pm and 10pm, and on the 1st and 3rd Sunday of the month between 1pm and 4pm

* Monday nights are reserved for new members courses and special group events only.